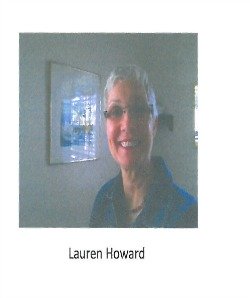 Born in 1953 in Cambridge, Massachusetts, Lauren grew up in New Jersey and moved to Canada with her family in 1963.

She graduated from York University, in North York, Ontario Canada, with a Bachelor in Fine Arts, and began a career as a musician and musical director, traveling throughout Canada, the U.S. and internationally in Barbados and Cuba.

She graduated with a Bachelor in Psychology from McMaster University, where her father is a Professor Emeritus, and a Bachelor in Education from Brook University, Ontario, Canada. She taught instrumental music to middle school and high school students in Canada, and here in Gainesville, Fl, at P.K. Younge, DRS.

After teaching Spanish at P.K. Younge, she pursued a career as a paralegal and presently works for an attorney in Gainesville.

Her musical roots come from the jazz of Miles Davis, Sonny Rollins, Kirk Whalum, the rhythm and blues of Chaka Kahn, Aretha Franklin, and Earth Wind and Fire, and Latin singers such as Luis Miguel and Latin Jazz performers such as Tito Puente. She is a big fan of traditional country and western music, like Bob Wills and Hank Williams Sr., and crooners Frank Sinatra and Canadian, Michael Buble.

Mt. Pleasant United Methodist church has been instrumental in her introduction to gospel, spiritual and Christian music.

It is through this music that Lauren has begun to walk a new path with Jesus Christ.

Join in and write your own page! It's easy to do. How? Simply click here to return to Performers.